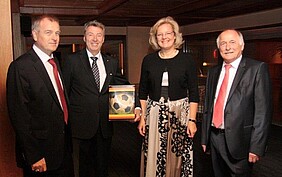 [FIDEN: Fédération des Entreprises de Nettoyage, established in 1956 with the aim to offer entrepreneurs in the field of building services an international platform for the exchange of ideas across national borders and to provide a basis for cross-border projects.]

The renowned Austrian entrepreneur Mr. Viktor Wagner received the FIDEN-award for achievements in the building services trade in Europe through FIDEN-President Hans Ziegle at a glamorous evening gala in Athens on September 24th, 2016. The price was presented by the Austrian Ambassador in Greece, Mrs. Andrea Ikić-Böhm.

Viktor Wagner is a recognized expert and promoter of international relations in this industry. He has been Vice-President of the FIDEN - Association for many years and has contributed significantly to its success. FIDEN presented to Mr. Wagner, a big football fan, a special gift: He received an original football with autograph signatures of the former Austrian winning team of the legendary football match in Cordoba in 1978, where Austria won against Germany during the World Cup in Argentina.