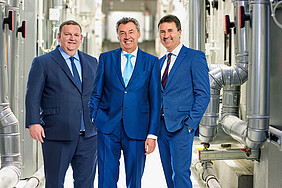 Due to the rapid growth of the REIWAG Group, the management team of REIWAG was expanded internationally at the beginning of 2020:
Mr. Paul Dragoiu was appointed in addition to the existing management as managing director in the Czech Republic, Slovakia, Croatia and Serbia.

Also for future REIWAG market entries, such as currently in North Macedonia, we are pleased to be able to entrust him with this responsible and networking task as managing director. In particular, Mr. Dragoiu will support the international coordination of major international customers.

Paul Dragoiu has been Managing Director of the Romanian subsidiary BSS Building Support Services since 2015. He and his team succeeded in doubling sales in the past five years and developing the REIWAG subsidiary into the market leader.